The public art program on the LA Waterfront engages local, regional, national, and internationally known artists to create public works of art that reflect the interests, history, character, and cultures of the local harbor community, while bringing a fresh and diverse range of cultural and artistic perspectives to the process. The Port of Los Angeles supports and encourages the local art scene in and around the L.A. Harbor Area.

The proposed public art installation on the LA Waterfront is administered by the City of Los Angeles Department of Cultural Affairs in compliance with the City’s Public Percent for Art Program, which allocates 1% of all capital improvement costs for the commissioning of public artwork. The program facilitates the production of unique public art experiences that impact L.A. residents and visitors. By commissioning artists to create site-specific artworks, the program provides education, advocacy, and opportunity for a diverse group of artists working to activate the City’s urban landscape. 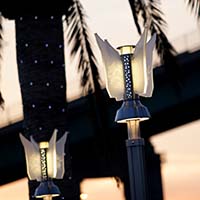 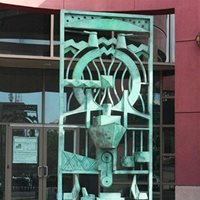 This bronze abstract sculpture recalls the Los Angeles Harbor's importance to the shipping industry and the Angel's Gate Lighthouse at the harbor entrance. Twin spires above the central container ship image evoke the shape of the nearby Vincent Thomas Bridge. Designed by John Okulick and Chad Ben-Artzi, the sculpture was installed as part of the Beacon Street Redevelopment in 1994.

The benches along the promenade are a mix of metal, granite and traditional wood with a nautical theme. 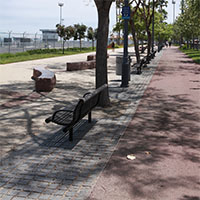 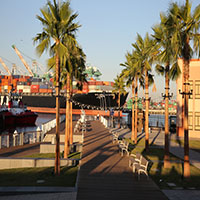 Created by local San Pedro artist Harold Greene, bench seating and wood tables feature inlaid nautical flags that correspond to a letter in the alphabet. At each table corner, flags spell out P-O-L-A for Port of Los Angeles, in addition to the following names: 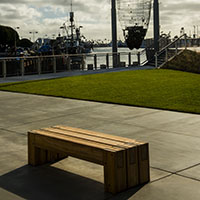 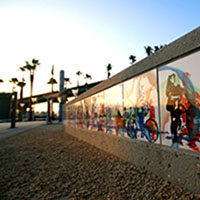 Created by artist Carl Cheng, the "Ghost Fish 107" sculpture is a 40-foot blue fin tuna hung from a galvanized steel frame over the water at Berth 73, next to Utro's Restaurant. Recalling San Pedro's long history as a commercial fishing hub, the sculpture incorporates aluminum and glass cast objects and artifacts gathered from local fishermen. A solar-powered camera and video screen capture the viewer's image in the fish's eye. 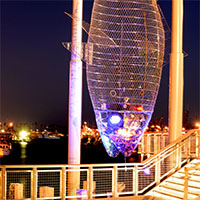 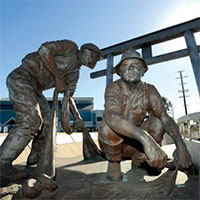 Created by artist Henry Lion, this Federal Art Project was completed in 1936 under the New Deal Depression Era Work Projects and honors famous explorer Juan Rodriguez Cabrillo, who in 1542, was the first to see and name this natural harbor Bahia de los Fumos, or Bay of Smokes when this coastline was little more than a swampy marshland. Nearly 500 years later, the Port of Los Angeles is one of the busiest and most successful manmade harbors in the world. 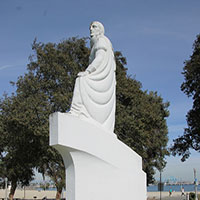 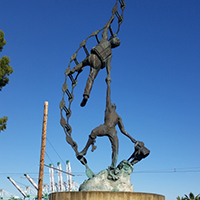 This memorial park is home to three important memorials: the American Merchant Marine Veteran Memorial commissioned by local seaman to honor marine veterans from all wars; the USS Los Angeles Naval Memorial which features the heavy cruiser ship's mast, two anchors and one anchor chain capstans (LACHM No. 188); and the Fishing Industry Memorial commissioned by volunteer fishermen and their descendants to preserve the history of the local fishing industry.

Donated by the City of Ischia, Italy to the Los Angeles community of San Pedro, the Monument to Multiculturalism or "Multicultural Man" statue by artist Fancesco Perilli is a symbol of peace, unity, and cultural diversity. The human figure depicts a universal man, faceless without anything that can identify a race or ethnic group or national costume. Identical statutes are displayed in South Africa, Bosnia, China, and Australia. 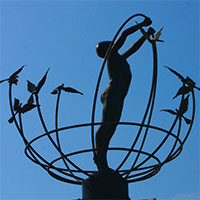 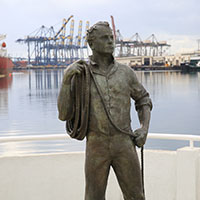 General Phineas Banning is best known as the "Father of Los Angeles Harbor." Sculptor Eugene Daubs created this seven-foot tall bronze statue portraying Banning with his sleeves rolled up and a coil of rope slung over one shoulder to capture his industrious nature.

Each letter is depicted with an alphabet sailing term. Follow the path, to learn nautical terms from A to Z.

B: Boo, a horizontal spar attached to the bottom edge of a sail.

C: Capstan, a drum or barrel shaped device operated by hand or motor used to haul in heavy anchor chains.

D: Dorade, a horn type of vent designed to let air into a cabin while keeping water out.

E: Eye Splice, a loop in the end of a line formed by braiding the end of the line into itself.

F: Fathom, a measurement relating to the depth of water. One fathom equals six feet.

I: Inspection Port, a small watertight covering used for inspecting or removing water from the hull.

J: Jack Line, a strong line or wire stay along the side of a boat for attaching a safety harness.

K: Keel, the center timber at the bottom of a boat’s hull to which the frames are attached.

L: Leeway, the sideways motion of a boat, pushed by the wind or a current.

M: Masthead Fly, a weathervane or wind indicator at the top of a mast.

O: Outhaul, a line used for adjusting tension at the foot of the sail along the boom.

P: Pelorous, a navigational instrument similar to a compass, used for taking bearings.

Q: Queen Topsail, a small stay sail located between the foremast and mainmast.

R: Ratlines, rope steps made of small lines tied across the shrouds: the crew can climb a loft on them.

S: Scuppers, drains or openings to allow the flow of rough seas over the deck.

T: Telltales, short strings of yarn attached to the shroud, used as indicators of wind direction.

U: Uphaul, a line or wire used to control the height of a spinnaker pole.

W: Wind Scoop, a funnel used to force wind into a hatch and ventilate the below deck areas.

Y: Yankee, a foresail which flies above and forward of the jib usually seen on bowsprit vessels.

Z: Zenith, a navigational term for the point of the celestial sphere which is directly overhead. 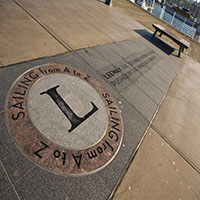 "The Ship Chandler" by artist Mark Dion, the official art piece of Downtown Harbor, is an approximate 9-by-12-foot cabin comprised of salvaged materials that represent 19th Century Port of Los Angeles. Designed to be viewed from the outside looking in, the structure is located in the plaza area near the Los Angeles Maritime Museum. Inside the chandler, one can see old shipping artifacts and nautical items. 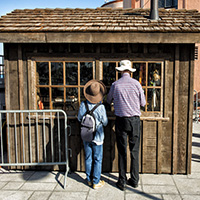 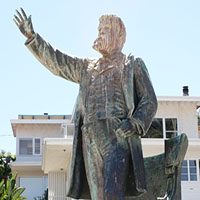 Created by artist Douglas Tilden, this statue depicts U.S. Senator Stephen White who pushed for federal support of the Port of Los Angeles at San Pedro Bay. In the late 1880s there was a great political struggle for an "official" port location. The Great Free-Harbor Fight was one of the greatest struggles for control of West Coast cargo transportation in the history of the United States. Some say, Phineas Banning may have been the father of the Port, but Stephen M. White was certainly its savior.

Story ropes were built into Harbor Boulevard Parkway to tell the history of the Port of Los Angeles. Beginning with the discovery of San Pedro by Cabrillo and ending with today's working Port, these historical accounts are displayed in polished granite insets that adorn the promenade. Each of the 11 vignettes highlights important historical milestones in the Port's history. The story begins at 5th Street and continues to the World Cruise Center. 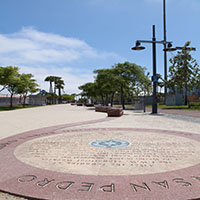 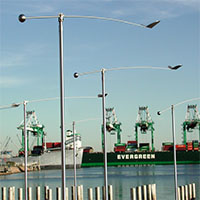 "Telltales" by sculptor Doug Hollis is an environmental art installation at the Cruise Ship Promenade that features a wind ensemble of sculptures that move and create sounds with the ocean breezes. The large-scale kinetic installation can be thought of as environmental indicator amplifying the sensory awareness of the environment. 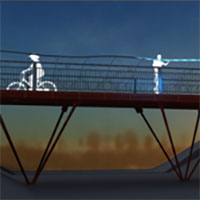